The English Bulldogs are a companion breed. The breed is small and muscular with the heavy bone structure, a smooth coat, a short face and trademark “bull” head. Prized for its affectionate nature and balanced disposition, they are generally active and alert, but not unduly boisterous. 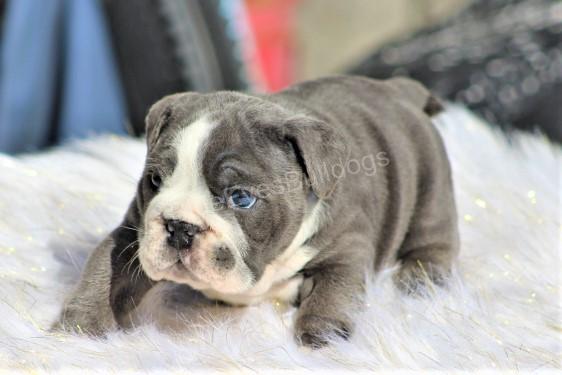 English Bulldogs get along well with children, and they're not so big that they can't live in a household with a toddler.

Hate to be alone

If you want an outdoor dog who can be left alone for long periods, the bulldog is not the breed for you. These dogs like to stay in cool weather and stay snug next to their owners

English Bulldogs make excellent watchdogs and will alert their people to approaching strangers, but it's not their style to bark without cause. They also can be potty trained easily after many times of showing where their food, water, and bed its.

English Bulldogs do not need a lot of exercise, but they do need daily walks to keep them at a healthy weight, but don't give any strenuous exercise or walk them in temperatures above 80 degrees Fahrenheit.

history of the English Bulldog

The extraordinary features of a Bulldog are reminiscent of the bull-baiting tactics and strategies that made the bulldog deadly effective in killing a bull. Bull baiting was a very bloody sport.

Normally the fight was staged in a field, a pit, or an arena. The concept of bull-baiting was for the dog to engage the bull. Bulldogs were trained to crouch low to the ground to shield their bodies from the bull’s horns when it charged. The shoulders were placed on the outside of the body. This was to make sure it could crouch low.

The wrinkles or skin folds on the face allow the bull’s blood to flow down the dog’s face under its chine rather than into its eyes (Think of this as water channels). Should the Bulldog be able to latch onto the bull’s nose, the Bulldog has a short snout on the face upwards to allow breathing, while retaining its grip on the bull’s nose. The bull is, in the meantime, suffocating, due to the loose jowls of the Bulldog blocking the passage of air.

Ever since Bull baiting had become illegal, the English Bulldog is now known as one of the most family-friendly breeds.

This is a smart, loving dog who wants and needs to spend lots of time with his people. A fun-loving freethinker, the English Bulldog takes well to training when it’s done in a positive manner with a good amount of food rewards, praise, and play.

English Bulldogs do not need a lot of exercise. They have fairly low energy levels, although there are exceptions to every rule. To keep their weight down, however, they need daily exercise through short walks or playtimes in the yard. Many EnglishBulldogs enjoy playing and will spend much of their time in various activities, but they are not so high energy that they need a large yard or long periods of exercise. Remember to clean them properly and make sure to clean under their wrinkles! Fun fact: Bulldog wrinkles had actually served to be as loose skin since they were bred to be fighting dogs. The loose skin helped them move around more even if the opponent had grabbed them.

English Bulldogs are fairly easy to groom and need only occasional brushing to keep their coat healthy. They are average shedders it is best to keep an air purifier if you have bad allergies to fur. Begin grooming your English Bulldog at a young age and teach your puppy to stand on a table or floor to make this experience easier on both of you. Remember to clean the wrinkles under the bulldog to remove any bacteria, and properly trim their nails to make sure it isn’t too sharp.