How to stop French bulldog puppy from biting | 5 best tips

How to stop French bulldog puppy from biting

Before buying an animal in hope of a long-term friendly and loving relationship, one must entertain the general information in their minds. It is necessary to know the concerned animal’s psychological and pathological health and behavioral traits related to the breed. If you are going to adopt an animal, it would be of great help to know about its behavior, needs, and characteristics.

‘How to stop French bulldog puppy from biting?’ Once a person has had a good study of the particular animal (in this case a French bulldog) they will begin to make useful distinctions in their minds. These distinctions are as useful in human relations as they are useful in animal relations. The French bulldog is a sentient being like humans and, she or he requires the availability of certain conditions to comply according to their much-appreciated breed.

The French bulldogs, unlike their buffed counterparts, were bred for one specific purpose and that is human companionship. The large bulldogs were used in violent sports like dog fighting and bull fighting the remnants of which remain in their behavior. The French bulldogs while being smaller in size were not made for such sports, they served as loyal and loving friends to humans and accompanied them in different tasks.

Despite not being mentioned as the most intelligent dogs in the world, they are quite intelligent. The proof of this may be evident from their aptness in learning. They learn quickly as compared with a few other dogs, they aim to please their owners and seek reciprocal appreciation. They adapt quickly to any agreeable personal space, they do not require a lot of space and can be accommodated easily in an apartment or a dorm.

Why else should you learn ‘How to stop French bulldog puppy from biting’? Biting is not something a French bulldog is known for. They are bred for the company and have some great and temperate, loving traits. Biting is something related to degenerate health or a deficiency in psychology. This happens in a French bulldog when she or he is not made familiar with the socialization process. They are apt to be unfriendly o repulsive towards other animals and humans if they have not been socialized.

This process involves several exercises and behavioral studies to make an animal more temperate in regards to the environment she or he is subjected to. here are a few tips to make French bulldogs stop biting:

What is Feigning your french bulldog puppy?

This is the process that is very popular among professional breeders who thoroughly understand the process of socialization of puppies. You may have noticed when an animal is bitten by another them sequel in response in turn and this causes the attacking dog to instinctively back off. Humans can also use their method, the breeders when met with such circumstances feign the noise a pup makes when bitten and it works perfectly as a form of biting inhibition process in French bulldog puppies. This is one of the ways breeders use ‘How to stop French bulldog puppy from biting’

In this process, the owners wear laxative gloves with a weird taste or smelly substance smeared on them (usually something bitter and safe for bulldogs). This makes the French bulldog reluctant in approaching such objects. This reluctance will ultimately lead to complete inhibition of such behavior. This process may also be used on other pets and objects your French bulldog proves most violent against.

Just like for human babies the chew toys are also used for animal puppies to inhibit biting. The French bulldogs are intelligent and can distinguish between good and bad in due time. If you notice them engaged in biting with someone or something quickly replace the concerning object with a chew toy. This tip is the most effective for new Frenchie owners on ‘How to stop French bulldog puppy from biting’ since your Frenchie may still be in its teething process.

This makes a projection of good and bad things in an animal’s mind causing them to cease biting. From time to time allow them to play with your hands but when they try to bite quickly give them the chew toy, this process with serving you in the long term, and the puppy will learn that a hand is not for biting.

The French bulldogs are aggressive over food and are very protective of it. They will eat it quickly and would not want to share it with any other animal. If they fear the food at risk they will bark or growl. This behavior can be dealt with tempting. By taking the bowl away quickly as you notice approach will increase temperance. And if they growl when you do that, resist firmly until they quiet down. If one can achieve this process successfully one can make their dog learn quickly.

Assert your dominance to stop your frenchie from biting

This tip is more aggressive for ‘How to stop French bulldog puppy from biting’. Once the puppy is made aware by the above tip that you can give them food or take it away, the puppy will gradually turn more temperate and trustworthy. If they do what you want to give them treats and pats, if they resist then in turn desist in the procedure described above as it is most important in constructing the best dog-owner relationship.

Watch out for the Health of your French bulldog

If you are looking for a French bulldog, it is important to know the procedure regarding the health of the French bulldog. Be wary of buying from an anonymous seller or a pet farm. One has to understand an animal’s history to be able to cope with them. The basic knowledge of this history is provided by their breeders who sell them but if you are buying from a shelter or pet store you cannot trust the sources.

For example, in animal shelters, the animals are adopted by people which were saved by rescuers. The animal shelter employees might be able to provide you with some information but they are not much aware of the concerning animal’s history before they rescued them. an animal subjected to abuse or malnutrition et cetera will be suffering from trauma and this trauma makes them less trusty towards human beings. But this is no reason to not adopt from shelters. The process of recovery for a rescued dog builds up love, trust, and friendship between the owner and the dog.

On the other hand, the animals sold to pet stores also have troubling pasts (In most cases), because they are not raised by breeders but are bred on animal farms or pet mills. In such places, the conditions are highly malnutrition and unkind to any animal. The animals are not fed well they are constantly impregnated and the newborn pups are kept for profits. When selling, they emphasize appearances using psychical makeup while the animal is suffering from several life-threatening diseases. The best place to find a french bulldog for sale is breeders that have been in business for 1+ years, have a health guarantee, and plan on staying in business in the future.

Thats all for ‘How to stop French bulldog puppy from biting’ read more info on frenchie below!

If you are looking for a healthy blue-eyed French bulldog for sale in Texas check out blueeyesbulldogs we are a non-kennel breeder and treat our pets like family! Now back to How to stop French bulldog puppy from biting.

Your french bulldogs Behavior and understanding

Their behavior is based fundamentally on their breed and adapted traits. As mentioned above, they were bred for companionship which basically and deliberately focuses on loyalty and non-violent behavior. A lot of improvements have been made since the emergence of the French bulldogs. Today, the French bulldogs make for a perfect house pet. They are very temperate and loving and also great with small children.

They are active and spend most of their type playing with inanimate objects. They tire easily and drain their energy while engaging in these activities so it is natural for them to take long naps. Unlike a lot of other dogs, they do not require a lot of exercise under express human surveillance, which means that the owners do not have to take a lot of personal time to take French bulldogs for walks.

The main purpose of dog walks is socialization and exercise, while the French bulldogs can take care of the latter need almost completely by themselves the socialization being a necessity needs to be done by a professional breeder (this is necessary for pups because they are in the process of development and comprehension, however, the adult French bulldogs raised by breeders are already made familiar with the fundamentals). The socialization of little pups makes them tolerant and trustworthy of human beings and other animals. This step mitigates or eliminates any harmful tendencies of the French bulldogs towards themselves or other sentient life.

Should I choose French bulldog or English bulldog?

There is not any considerable behavioral difference between the two breeds since both were raised and bred as companion dogs. The main difference regarding physiognomy between the French and the English bulldog is their size. the English bulldog is relatively a bit larger than the French bulldog and a little less quirky. The same amount of exercise in terms of duration suffices equally for both dogs 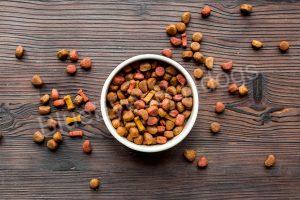 How to Care for an English Bulldog puppy? 2023 guide!